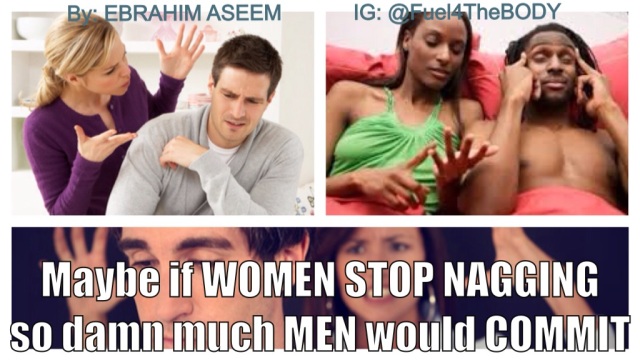 Queens: Men are NOT mind readers. If there is an issue, don’t always expect us to be aware of it if you hold back & don’t communicate tactfully.

Kings: Women are NOT naggers. We have to listen more to understand her, be observant & pay attention to her. Her look reveals her feelings. One word can tell you everything on her mind.

‘I’m fine’ can mean she’s going through it.

‘It’s ok’ means she’s really wants you to do something, so don’t disappoint her like everyone in her life always has.
‘Whatever’ means she feels continuing to talk to you will get her nowhere, because she can clearly see you lack understanding and common sense to follow her wisdom.

‘You know what?…’ means she really wants to tell your stupid ass the hell off, but she doesn’t want to allow your immaturity to dim the shine of her happiness, so she is choosing her words carefully.

‘Never mind’ means she wants you to do something on your own, without her having to tell your ass, but she doesn’t want to be the one to bring it up, because she’s so tired of being disappointed. COME THROUGH FOR HER! Make her feel crazy for ever doubting her expectations of a man. If we’d just LISTEN, we’d understand women so much better.

Men, let’s stop saying our women are nagging us.

If she’s nagging you about keeping your word, getting a job, going to school, setting goals, being responsible, cleaning up, utilizing your talents & pushing your potential, that’s not called nagging, that’s called being your MOTIVATION. Your Backbone. Your rib. Your Queen. And a queen doesn’t want a peasant boy with no goals, A queen wants a king with drive & ambition, who is confident, yet HUMBLE. A queen wants a man who is strong and hard, yet not too tough and solidified to be molded by her ceramic wisdom and insightful advice.

“Most women are annoying and they nag, because they don’t know how to respectfully communicate without rolling their necks and speaking loudly. Can we agree on that?” a marine complained, during a cooking class I did for a group of recently deployed Marines and Airmen.

“No man wants to deal with an annoying woman,” he continued. “Now, I love my girl back home, but she always tells me things fifty times, and when I complain and tell her that her nagging is the very reason why I am so hesitant to commit to her fully, she just cries right in front me and makes me feel like an asshole. Now, all of a sudden, I’m the one wrong for being honest. It’s not like I can’t see myself with her long term, we have three kids together and I would love to one day take our relationship to the next level, but I’m a grown man and I shouldn’t be spoken to like a child by my woman. Maybe if women stop nagging so damn much men would commit to their lonely asses. Maybe if women knew how to treat a man like a man and stop being so annoying, we would want to come home to them and only them. When I express my true feelings to her like that, she cries and bitches about me, saying I’m being insensitive. So, how should I respond to her when she’s nagging me and going off on her tangents?”

“A nag is a horse. We have to stop using words referring to women as animals, like horses and dogs, and start valuing her words. She’s not nagging, she’s not bitching, she is speaking life into you and it is up to you to value the love she has for you to correct you and perfect you.

Respond to a woman honestly, but with respect. Love is not a war soldier. Don’t use your words as a weapon to pierce your woman, use your words as a pair of binoculars to helps her see deep inside your heart to how much you care about her. Don’t lug spiteful grenades at her with your selfish verbiage, help her see why you even want her in your life at all, it should be crystal clear. As men we can not camouflage our feelings for our woman, we have to put them on display. In any response to your woman, let your words be a revelation of two things, an expression of how you feel about the matter at hand and an assurance to her of how clearly you can see her worth and benefit to your life.”

“I’ve been engaged to my boyfriend for nine months,” a tall airwoman revealed, “Well, technically we aren’t engaged yet, because he didn’t buy me a ring. Before I deployed, I told him I wanted us to be married, and he said he didn’t mind. Since then, I have kind of been planning out our wedding to take place sometime in the next two years. But, I have to admit, I get real discouraged about our future together, because I feel like I am the only one being responsible enough to invest in my education and career, while fighting for my country, while all he does all day is play Call of Duty and sell weed. How do I get my man to think more ambitiously for our future together?”

Pushing weight is not a career. Pimping is not a career. Making t-shirts is not a career. If a male tells you otherwise, tell him, ‘cool shirt bro, but you’re not a fashion designer, you’re just a male who sells t-shirts with mildly clever words printed on them.’ Those are side hustles and I never knock hustles, but know this; having a side hustle does NOT make one a hustla.

A TRUE HUSTLA has ambition, drive and determination to accomplish dreams. A true hustla has the mentality of a boss with unbreakable goals. No one should ever knock anyone’s hustle. Likewise, one should never limit one’s self to only a side hustle.

A queen will always bring the best out of you, she will not bite her tongue when she sees you need words of wisdom, she will not put a muzzle on her mouth, in fear you will think she has a smart mouth, she will always speak her mind and speak life into you. To treat a man like a man is not to only tell him things he wants to hear, and fear saying words that will crush his fragile ego. To treat a man like a man is to hold him in high regard and hold him accountable for his actions with respect and love.

I most definitely respect any man or woman who speaks their mind, regardless of what the hell anyone has to say about it or thinks about it. A strong minded man is admirable. A strong minded woman is commendable. Any man who can’t respect a strong minded woman who respects him, it’s because he’s an insecure coward of a male. A strong man will want his woman just as strong and confident as he is. This is the type of virtuous woman a mentally-mature man is dying to commit to, a woman who is a habitual truth speaker and a hopeless romantic.

I learned the most romantic thing I can do as a man, is listen to a woman, understand her, take mental notes, then when she least expects it, surprise her with something small she told me she likes. A woman just wants to know we are listening and understand her. If we as men listened to women more and complained about women less, there would never be a reason for a woman to ‘nag’ us in the first place.”

75% of my Facebook friends list are men, in the Air Force, navy & army, because my grand pop was a Tuskegee Airmen. So many of my distant uncles, cousins and homies are veterans. Many words I post online, sharing how to VALUE a woman & be a loyal man is based off the 100s of inbox messages these men send me weekly, asking me advice about women, to help them with their LONG distance relationship they have with their wives and girlfriends back home.

Being deployed away from their woman for several months in the year is so hard for them, they risk their lives protection our lives, our country, our rights, our security and they don’t do it for praise, they do it for a deep, undying love they have for all the people in their country. Many of them tell me they copy & paste my posts, print them out and send them to their woman, just so she can know he is not blind to her worth.

No matter what your opinion of war or politics is, you have to appreciate a man who not only puts his life on the line to protect you and fight for your freedom, likewise you have to respect a man who every day he is away from his woman, will focus on her and how to be a more understanding, emotionally sportive and loyal man for HER. I salute these men and woman, and anyone who fights to protect our rights as people. To me, that is a real king and queen.

I’m doing a speaking tour this summer, comment your city if you’d come hear me speak there.
For Public Speaking inquiries & booking, contact me AEAseem@gmail.com

Click on the link bellow for more!
thought provoking articles like this,
Or to read a preview of my book, which should be available summer 2014

Follow/add me on Facebook and request your free copy ASAP

I am a chef, writer & motivational speaker. I've been a youth mentor for young Black men for 10 years & I'm currently shopping my first book, "Why Men Cheat on Loyal Women"
View all posts by Ebrahim Aseem →
This entry was posted in Thought Provoking Articles and tagged Ebrahim Aseem, memorial day, military, veterans, why do women nag?, why women nag. Bookmark the permalink.