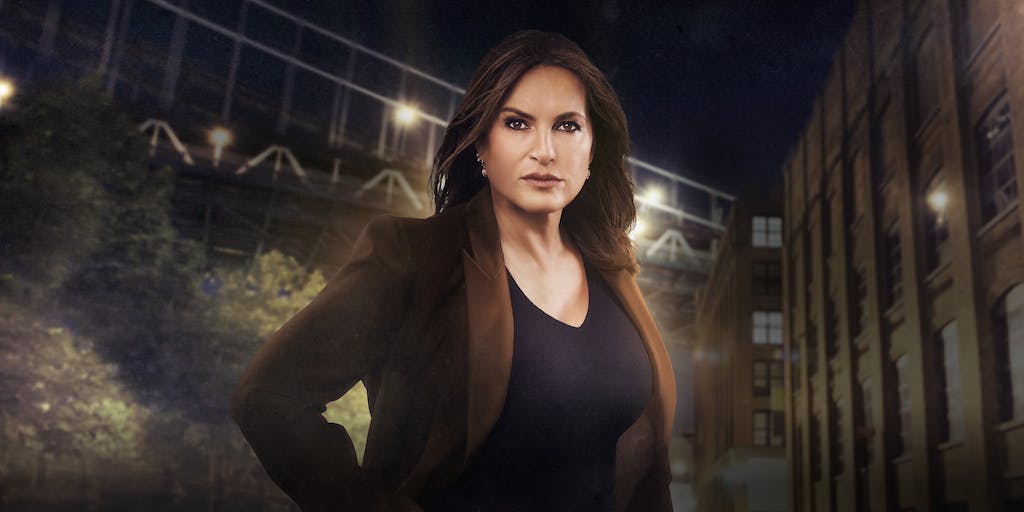 Ice Cream + Law and Order SVU marathon = the recipe for a Deep Thinking Woman But why?

75% of my network consists of my deployed male friends, overseas in the Air Force and Marines who are away from their wives for 6 months at a time. Among the many relationship questions men email me weekly, one question they always ask is, “why does my girl love watching SVU marathons so much?”

Ladies love Law and Order ==> SVU <== specifically, for these reasons:

1. Strong Women with a Smart-Mouth are celebrated.

In a man’s world, strong-minded women are often discouraged to down play their strength and portray submissive characteristics by weak-minded men who are intimidated by the strength of a woman.

Olivia Benson represents the feminine, strong-minded woman inside of every female. She’s gentle, yet tough as bricks.
She’s feminine, yet not super-girly.

She can seduce a man with her beautiful smile, or kick his ass with her quick hands and sharp tongue.
The later is one of the more subtle, yet empowering aspects of her character, displayed on the show.

Often labeled an offensive adjective that starts with the letter “B” by weak men,
who couldn’t assume them alpha role if their manhood depended on it,

SVU displays the true nature of a smart mouthed woman as one who knows her strength and embraces it.
Who doesn’t down play her intelligence to appease the male ego.

Who doesn’t bite her tongue.
It shows a woman doesn’t have to follow every statement she makes to a man with a girly giggle or an “lol”, as a way to lighten up her intelligent assertions.

Who doesn’t have to passive-aggressively respond to a man under her breath
as a way to avoid his father-like discipline of her not “knowing her role and staying in it”.

Women love her, because she doesn’t take any misogynistic BS.
Not only does she stand up for women on the show, Benson /Marishka founded the Joyful Heart Foundation in 2004

To heal and empower survivors of sexual assault, domestic violence and child abuse, while raising awareness for these often over-looked epidemics.
Gotta love a strong-minded woman with a conscious.

One word says it all for true SVU fans
who’ve been watching from the start.

Strong minded women LOVE a strong man, with mountains for arms who knows how to take charge and DEMAND her attention with his romantic aggression.
Elliot Stabler is just that.

Although Christopher Meloni has since left the show, he won’t soon leave true fans’ hearts.
The impact his punch first, ask questions last persona leaves on the screen, as well on the face of a suspect, is unshakable.

Even a woman who refuses to watch a horror film
will sit and Google “serial killers” on her phone all day,

or read about “The black dahlia” on Wikipedia, until her eyes turn red,
or YouTube the most heinous real life crimes, like the news clip about the mother who put her 2-month old baby in the microwave, while on her lunch break.

This counterphobic attitude is a response to anxiety that,
instead of fleeing the source of fear in the manner of a phobia,

one actively seeks it out, in the hope of overcoming the original anxiousness.
It’s a subconscious response to seek out what is feared.

A woman’s love for detection and problem solving rivals her love for chocolate.
And that’s saying a mouth full. When she first meets a man, she has no hesitation to background check his Facebook, google his name and phone number, and cross reference his social networks to ascertain his TRUE relationship status, if he has any children, as well as his characteristics and attributes. By the time a woman agrees to go on a first date with you, she knows substantially more about you than you know about her.

The thriller of solving a suspense or mystery gives life to an intelligent woman. A CSI team has nothing on a woman’s intuition. A woman knows the answer to a question she asks a man before she even asks us. She just wants to see of we will be honest with her. This is why a man should never lie to a woman, she knows. Trust me.

Women are DEEP thinkers by nature. They will stay up all night, playing out scenarios in their head about what “would” happen if she did this, or what “might” happen if she did that. There’s something therapeutic to a woman about watching an SVU marathon with her phone in one hand and a container of ice cream in the other.

Despite the anxiety crime and violence induces, experiencing it through a fictional lens helps a woman minimize her anxiety of her fears, through familiarity and understanding coupled with the usually satisfying conclusion of the abuser being brought to justice at conclusion of each episode.

*If you love reading about crime and serial killers, bookmark this link ==> http://longform.org/crime

When a woman gets sexually harassed by a co-worker, family member or her bestie’s husband, SHE is told,
“how can you dress so sexy like that and not expect a man to want to force himself on you?”

But on SVU, the cops don’t blame the victims, they listen to them.

They treat them with respect.
They don’t ask women, “well, what were you wearing or doing to MAKE him touch you?”

Ignorance like this is not allowed on this show.

The police are extremely attentive and they show the victims they really care.
They treat women with the respect, assuring them their abuser will be caught.

1 of every 3 women are physically or sexually abused at some point in their lives.
In real life, the victims are blamed for this.

But on SVU, the abusers are held to a high standard,
while the victims are comforted and their accusation of abuse or rape is often justified, as no one blames THEM for being raped or beat up.

Survivors of sexual & physical assault, find it healing seeing stories similar to theirs, where people actually care about the victim and bringing the perpetrator to justice in some way.
Survivors want to think some survivors get help and support the way they never did.

Their fantasies of Detective Stabler punching their abuser, rapist or molester until he was bloody and unrecognizable,
Olivia understanding and supporting them through the trial,

Alex brilliantly and successfully arguing for their abuser’s conviction,
causing them to emerge from therapy whole and unafraid is fueled through every SVU marathon they watch.

In real life, however, rape crimes are not taken seriously by police.
Sexual harassment at the office is common place.
A man hitting his girlfriend is laughed at, with ill-advised Chris Brown and Rihanna jokes subsequently following chuckles.

And the much too common “date rape” is often seen by many mentally immature males as,
something a woman “owes” him if he pays for dinner on a date.

Conversely, on SVU, the cops consider rape or domestic abuse just as serious as any other crime. This is why it appeals to a demographic that often has no voice and no one willing to speak for them. They watch it to feel less alone.
So she can know she’s not the only victim out there.

She watches it to see the rapists get their asses kicked and brought to justice, because hers never got punished.
It takes years before hearing ‘it’s not your fault’ becomes an emotional reality, so

Sexual & domestic abuse survivors can find comfort in living vicariously through a character they know will receive some solace within the conclusion of the sixty minute episode.

*If you have ever been abused, physically or sexually, this 2 minute video will help HEAL you!!* Listen to me Speak LIFE into you ===> http://youtube.com/watch?v=bwSnify-K6M

6. the Elliot and Olivia hook up that never was, but always seemed right around the corner.

How many women have watched SVU every week to see if this week is the week that Olivia and Elliot would one day make love, because their sexual tension is insane?

The irony of a once hardcore rapper playing a police officer on TV is humorous in and of itself,
and yet Ice T’s sarcastic loquaciousness makes the irony of his existence on a cop show play the comedic straight man.

This clips acts as a perfect ode to Ice T’s unbeknownst hilarity:

8. SVU Marathons are so suspenseful.

You can get emotionally invested in the characters
without having to start from the beginning and watch every single episode sequentially;

Unlike many shows that are impossible to understand unless you binge watch the first three seasons on Netflix without leaving the house for 2 days straight, and if you miss one episode, you have no idea what’s going on and who the hell people are.

Whereas with SVU,
you can turn on the TV and see a complete story in an hour with beginning, middle, and end each time; and you don’t have to watch them in order. This is the major appeal of an SVU marathon. It’s like turning on your favorite playlist and randomizing the tracks.

At the same time, there’s continuity from episode to episode, and Benson and Stabler age, evolve, and change throughout the series,
unlike shows where the main characters are static and interchangeable.
Character development is a huge appeal with SVU fans.

It’s like a mystery or suspense novel in this regard.

A very low number of rape cases are convicted let alone reported.
The number of people who truly believe most rapes are fabricated and that most women “cry rape” for attention is terrifying.

This lie contributes to the reason most women who get raped don’t report it to the police.
They genuinely feel like no one believes they were really raped.

There is a huge misconception in the world about what “rape” REALLY is.

No matter if a woman consents to sex with a man or not,
if at any time, before or during sex a woman says “stop” “no” “don’t” or “pineapples” it means get up and stop.

Males who say, “well she didn’t use the safe word” or “sometimes no means yes, and stop means harder” miss the point.
Sex is about comfort level.

If at any time a woman doesn’t feel comfortable during sex, it’s best to stop, otherwise that is indeed rape.

The only thing about rape on SVU that is misrepresented is the persistent myth that most rapes are stranger rapes.
Studies show between 70% and 90% of all rapes are committed by someone the victim already knows.

This is rarely portrayed on the show, however,
SVU does a great job of displaying the severity of sexual assault through the amazing storyline and character chemistry.

Signifying a beautiful escape into a fantasy world where life is just a little more fair for women.
Why do you love Law & Order SVU so much?

My book will be out this summer.

I’m doing a speaking tour this summer, comment your city if you’d come hear me speak there.
For Public Speaking inquiries & booking, contact me AEAseem@gmail.com

I post new articles every Thursday.
Here is my first ever motivational video ====> https://www.youtube.com/watch?v=h5Tvuz0f7r0

Click on the link bellow for more! motivational videos & thought-provoking articles like this,
Or to read a preview of my book, which should be available summer 2014