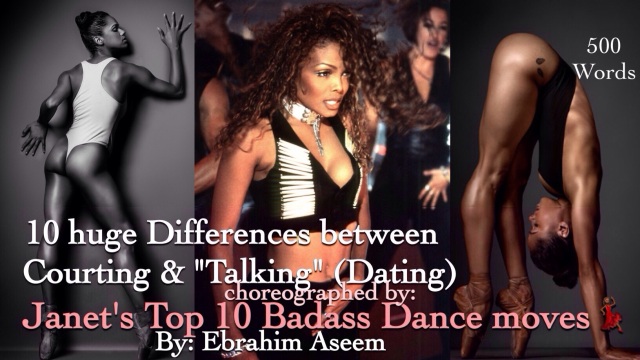 Janet Jackson is one of the greatest entertainers alive. Her soft voice is comforting. Her smile, reassuring. Her dancing, elite. The quality of music is suffering today, because the spirit stimulating substance that is art of dance is being neglected in favor of neo-techno & twerk anthems. The same way the art of courting a woman is being neglected in favor of “talking” via dating. | 10 huge Differences between Courting & “Talking” (Dating)

I'm not married yet, b/c girls in my generation feel "talking" is a relationship. They give you loyalty & don't require commitment😒 #TurnOff

If he's "dating" you he can be "dating" other women. If commitment of COURTship is not your STANDARD a guy will toy w/ u til he's bored w/ u

If his confidence doesn't intimidate you & his intellect doesn't render you speechless he's not for you. Stop "talking" to boys. Court a MAN

Date a woman who can dance or who appreciates the art of dance. Court a beautiful soul loyal to her passions. The grace, rhythm, humility, balance & substance she will add to your life is unparalleled.

If he can have your heart, body & loyalty w/o having to ever commit or take you on dates, he's not the problem. Your lack of self worth is.

An emotionally driven woman or man is not easy to be in a relationship with. Everything is a problem to him or her. When you speak your mind, they call it “attitude”. When you call out their inconsistency, they call it “nagging”. Dance calms the spirit, influencing one’s intrinsic mind to rule over emotional mind. If their actions can’t dance to the beat of your loyalty level with consistent movement, two-step out of their life.

If a man doesn't let you know on the 1st date if he's looking for casual dates, casual sex, a relationship or a wife ABORT. He's playing you

On 1st dates I tell her Im single & go on dates w/ other women😯 Also, I'm abstinent while single & looking for a wife. We too old for games.

When the frequency of a beat touches your spirit, your soul dances. This is why I listen to neo soul, 90s R&B, oldies & funk more than this poor excuse for music made today. I’m an old soul who misses real music that expresses the art of loving a woman and courting a woman. Now she’s a “hoe who ain’t loyal” who better “make that ass clap” and if she “ain’t a hoe get up out my trap house”. Those lyrics are suspect. Down Low vernacular.

Call her tonight. Say "Your conversation is as beautiful as your mind. I'm taking you out on a date this weekend 🍤🍷 What time works for you?

For a 1st date, take her somewhere that allows for conversing & interacting. Avoid loud places. Wear a tailored suit. Be confident & groomed

If y'all only knew how dry a beautiful woman's schedule is She's dying to be taken OUT for food. Dancing. Wine tasting. Snorkeling #CourtHer

Twerking is NOT a dance, it is a dance MOVE inside a dance. Twerking activates only the second energy chakra, preventing full chakra activation, yet when holistically accompanied by a collection of dance moves, all chakras will be activated. Holistic dancing promotes inner peace & stress draining tranquility. Not all pole dancing is stripping. clothed pole dancing is an art, symbolizing yin/yang, the energy of balance. The pole symbolizes the spinal cord’s grey matter, which connects to the pineal gland. #EbrahimAseem

If they switch up & leave after realizing they can't get what they want from you REJOICE. A user just blessed your life by walking out of it

If you gave him loyalty before consistently seeing how he behaves when problems arise, he didn't switch up. You were disloyal to your values

Men, stop wasting time, watching InstaModels Twerking on your phone, thirsting after strippers on Instagram, hoping they respond to the ashy dick pic you direct messaged them. Take your woman out salsa dancing, bachata, Jazz, slow winding at a Jamaican club.

If you continue to stay loyal to a man's inconsistency, he has no incentive to ever stop starving you of effort.

Take her to a Jill Scott, Erykah Badu, Maxwell, Avant or Temptations concert. Dance with your woman. Allow your hearts to synchronize in the rhythm with the beat. Spend that intimate time with her. So she knows that anytime, anyplace you’re willing to honor her pleasure principle & paint smiles on her canvas face.

Men treat a woman the way she ALLOWS. Require courtship he'll respect your values. Give loyalty before he gives commitment & he'll play you.

#WeCantDateIf we cant court or build a future together. I dont do "talking" I want children. Marriage. I want loyalty. Love. I want FOR LIFE

I’m so happy Janet is touring for the first time this decade. I want to take my niece to see her for an uncle day. My niece is a dancer. My daughter will be a dance & I will marry a dancer one day.