What’s hardest for a woman isn’t losing him, it’s forgiving herself for falling for POTENTIAL | Breakfast In Bed Ep.11 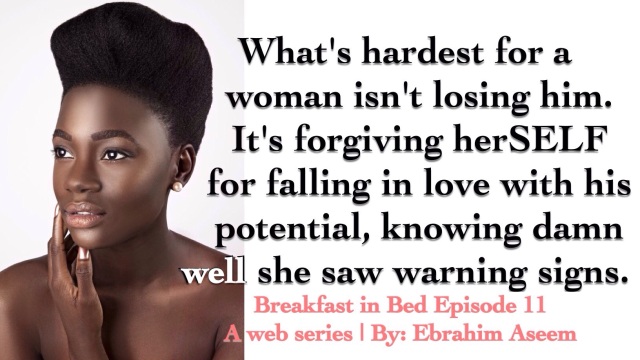 “Your sister is a fighter,” Anthony told Rosaria, “not just for herself, but for her family and everyone she loves. When she asked me to kill her brother, I was confused. Yet, now I understand. She loves you more than anything. Austin hurt you in the worse way & she wanted me to protect you from him. When your father told me where she was and how to save her, I knew it was a trap. He wanted me to go to that cabin and get ambushed, so your brother Austin could come here and finish you off. I did what India would’ve wanted me to do. I fought for the person she loves more than her self, you. But I know with every fiber of my being India will fight, claw and push herself out of harm’s way and back into my arms. I know this, because I instill her with love, confidence and undeniable baddassness.

India is a solider. She’s my solder.”

“I want to be your solder too,” Rosaria confessed to him. Anthony put his gun in his shoulder holster, walked over to Rosaria, grabbed her shivering body and lifted her up in his arms, until the were both at eye level.

“When I look at you,” Anthony confessed to Rosaria, “I don’t just see a beautiful dark-skinned woman with curves for days & hair for weeks, I see the love of my life, I see my future wife, I see your sister India. So no, you can’t be mine. My heart belongs to India and I’m loyal to your sister.”

“Of course you see my sister when you look at me, we’re twins,” Rosaria joked, “but make no mistake: when I say I want to ‘be your solider’, I don’t mean it in some sexually submissive way.

I love how you trust my sister & can depend on her to go out on a mission & defend a cause you believe in. I want to have that too. To live for something greater than myself. I want you to trust me. Have confidence in me. I want you to be for me what I never had, a big brother.

Rosaria’s brother Austin begin coughing up blood. Rosaria pick up the vase off the night table & smashed it over her brother’s head, until his consciousness faded to black.

It was pitch black, except for the light from the fire India had just started to free herself from the grasp of her mother’s hired henchman. Even though she was just now running for governor, India’s mother Gloria had police officer on her pay roll for the longest. Prominence is power & money talks. But with the flick of a match, India caused her mother’s flawless plan to go up in flames. As she limped her way to her mother’s car, flirting with the option of escaping, a guilty fueled question came over her.

Should I flee to safety? or search for my mother’s body?

Despite all the cold, manipulative things her mother put her & her sister Rosaria through, she stilled love her. She couldn’t help it. The only reason an affectionate giver doesn’t do people the same cold way others do them is, because their integrity won’t allow them to. India limped back towards the burning cabin in search for her mother’s body like a sergeant searching for the body of his fellow fallen solider in combat.

“Ok, you want to be my solider?” Anthony asked Rosaria.

“First off, don’t salute me,” Anthony pleaded, “that shit gets annoying after a while. Now, what I need you to do is drag your brother’s body closer to the door while I move the shells. We need to set the scene so it can be obvious to the detectives who show up that Austin shot this female officer lying in the middle of the hotel room, and not you.”

“I got you,” Rosaria complied.

“Now how good of a screamer are you?”

India searched the perimeter of the cabin, along with the entrance & the garden out back. Surprisingly, she couldn’t find her mother’s body anywhere. Their were only two possibilities. Her mother had burned to a crisp in the fire, or she was hiding from her daughter, waiting for the right moment to attack.

“I’ve been attacked, abused & sexually assaulted most of my pre-teen-hood,” Rosaria confessed. “Needless to say, I have a ton of experience screaming.”

“You know, I’m so sorry you had to go through all that,” Anthony empathized.

“Don’t speak that way about yourself,” Anthony corrected, “you aren’t some damaged goods just, because your sick, demented male relative touched you when you were too young to defend yourself. You are beautiful. You are enough, and any man would be honored to have you.”

“I really wish my exs thought the way you did,” Rosaria explained. “Who I am has always been a problem to men. When opening up to reveal your vulnerabilities is always seen as a deal breaker, it makes you want to stay guarded up with so many walls. And it’s not that you feel like you missed out on something you know?

What’s hardest for a woman isn’t losing him. It’s forgiving her SELF for falling in love with his potential, knowing damn well she saw warning signs.

My trust issues don’t come from the cold way my EXs treated me. my trust issues come from my poor judgement. I’m at war with my own self. I was such a good judge of character before I let my guard down for the wrong one. Now, I’m afraid to trust myself again to judge rather to let the right one in.”

“Queen, allow me to reassure you,” Anthony told his girlfriend’s twin sister,

“you are not at war with your self. You are at war with the emptiness your EX left when they came in your life to rub their hurt on you. You sold your soul to your EX by giving them your all after they devalued you. That’s why you feel so empty & incomplete where a soul once was. Reclaim your worth! Give birth to self-love & self acceptance.

You have to forgive yourself for loving a person who never deserved you. You made a mistake. But the mistake was not choosing to love or letting your wall down to be loyal. Your mistake was not loving you before you love another. Your mistake was being more loyal to a person’s inconsistency than you are to your own damn standards.”

“Wow,” Rosaria confessed,” you know, I’m usually the one every person comes to for advice. Including your woman haha. You really just shut me up & left me speechless which is rare. I guess India really can pi….”

Suddenly the hotel door swung open. Burning flesh filled the room. Her shadow looming over Rosaria & Anthony, who appeared to be hugged up and too close for comfort. After slamming the door shut, the person begin to laugh historically.

“Finally,” Anthony yelled, “I’ve been waiting for you to show up.”

To be continued next week……..

This is a fictional, weekly web-story, based on true events.

I offered to incorporate subscribers emails for advice in the weekly #BreakfastInBed stories as a way for them to anonymously ask people worldwide for advice on their situations.

I am a chef, writer & motivational speaker. I've been a youth mentor for young Black men for 10 years & I'm currently shopping my first book, "Why Men Cheat on Loyal Women"
View all posts by Ebrahim Aseem →
This entry was posted in Breakfast In Bed and tagged breakfast in bed, Ebrahim Aseem. Bookmark the permalink.